Sucre, historically known as Charcas, La Plata and Chuquisaca, is located in the south-central part of the country. With a population of 247,300 (2016 statistics), the city is listed as the 6th most populated in Bolivia and is divided into eight districts, including five urban and three rural districts.

Sucre, as a developing city, is facing many problems such as traffic flow issues and crime. The municipal government is determined to create a better and safer living environment for its citizens by launching safe city project with an urban surveillance deployment project.

Dahua, together with a local distributor, Digital Security System SRL, enable Sucre to meet its goals of a better and safer city by offering a customized urban surveillance solution. This Solution includes Network PTZ cameras (SD6A230N-HNI and SD59230S-HN) that are installed in different zones of the city, connected by wired and wireless IP communication.

Among the two models mentioned, SD6A230N-HNI becomes the main product adopted. With powerful 30x optical zoom, triple-stream encoding support, and up to 60fps@720P and 30fps@1080P resolution, the devices perfectly meet the high standard requirements of the project. As for outdoor surveillance functions, this series also proves itself capable with an IR distance up to 150 meters and featuring great Day/Night performance in any lighting conditions.

The central control center features Dahua’s Digital Surveillance System 7016D, our first embedded general surveillance management console which integrates software and hardware together. In the control center, all the video can be stored for 30 days to fit the customer’s requirement.

"We appreciate having Dahua, a responsible and professional company, as our partner,” said Harold Ribera, Line Manager at DSS SRL. “The clients were unfamiliar with the new system at first, but Dahua’s team help solve the bugs and problems with expertness and effectiveness.
"It’s an honor that Dahua can take part in the safe city project in Sucre,” said William Zhou, Sales Director of Latin-America at Dahua Technology. “The result is obvious. After only a few months of operation, the whole area has seen a decrease in vandalism, theft, and violence. Dahua uses its advanced IP solution to secure property and people in Sucre. The longtime rigorous support from Dahua is highly regarded by the clients. We will continue to offer our strongest support and service.” 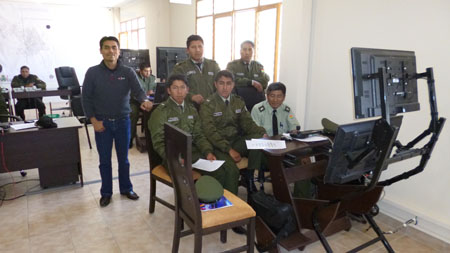