The G20 Summit is an annual meeting of leaders from 20 major economies to discuss global issues. In 2016, China hosted its first-ever G20 forum in the southeastern city of Hangzhou. Securing the leaders of multiple countries is no easy task, and would require many months of preparation by thousands of laborers in order to ensure the two day forum, transportation, and cultural activities ran smoothly.

The G20 World Summit was one of the largest security projects the country had ever faced, and extremely important to setting a precedent for future major events in China. 29 leaders including formal G20 members, the European Union, and invited guests, along with other high-ranking officials from all over the world required constant protection over a large area which included Hangzhou's Xiaoshan Airport and the roads leading to it, the main conference areas for the G20 and its sister conference, the B20, multiple hotels hosting country leaders, and the city's main tourist zone: the West Lake Scenic Area.

Dahua Technology assisted the Hangzhou government in constructing a large-scale, comprehensive security system consisting of over 20,000 devices. Cameras with 40x optical zoom and over 10km range covered large areas, while cameras with Automatic Number Plate Recognition (ANPR) technology scanned roads for dangerous vehicles. Over 500 PTZ cameras guarded critical routes from the airport to G20 and B20 conference areas. Thermal cameras provided unparalleled night vision support along with the ability to detect overheating equipment or fires. At train and subway stations, Face Recognition was employed to scan for known fugitives and verify tickets. Finally, all cameras were connected to a central cloud system which provided a real time assessment of traffic quality and threats through a traffic status cloud system and processed unstructured video data from cameras to analyze and generate thumbnails and descriptions for easy search and review. Suspicious targets were instantly tagged and tracked, and workers on the ground could be dispatched to keep tabs on the situation.

Pulling off a successful G20 Summit was achieved not through luck, but by a combination of over 20,000 devices connected by a unified cloud system and advanced technologies such as face and plate recognition, thermal imaging, and optical zoom. In addition to recording 29,823 traffic violations, Dahua cameras recognized and led to the capture of multiple fugitives attempting to traverse the city. The versatility of bullet, fisheye, and 40x zoom PTZ cameras employed in the security network ensured critical areas had no blind spots, and command center workers could easily direct those on the ground to quickly respond to suspicious behavior. Dahua helped keep world leaders secure in the midst of a prime chance for China to set a precedent for hosting major international government events and the pressure that it carried. This case proves the efficacy of Dahua products combined in city-scale projects, and is a perfect example for future Safe City solutions to follow. 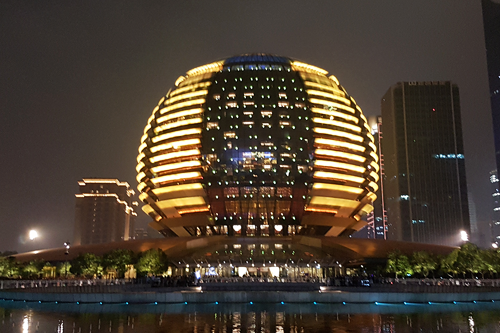