A college in Northern Ireland has benefitted from a donation of high quality video surveillance equipment from Dahua Technology. 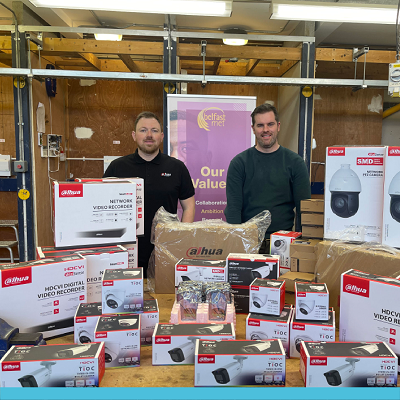 Dahua’s Business Development Manager, Ross Kane – a former student at the college who studied for an NVQ in intruder alarm systems for three years and now teaches there – presented the equipment to the college. It included TiOCs (three-in-one cameras) which feature full colour imaging, intelligent perimeter protection and active deterrence; a range of digital and network video reorders; IR eyeball and PTZ network cameras; and accessories such as hard disk drives and junction boxes.

Ross and his team are providing full training on the equipment and will also be advising on the CCTV element of the course. He said: “I am delighted to be able to present this equipment to Belfast Metropolitan College, and I feel by doing so I’m giving something back to the place where I started my career, and about which I have happy memories.”

Connor McGrath, lecturer at Belfast Metropolitan College, said: “I am blown away by the level of Dahua’s generosity and their willingness to invest in the next generation of engineers. The equipment donated is of the highest specification and will be used in our workshops by the apprentices for many years to come.

I would like to thank Dahua for gifting the equipment to Belfast Met and allowing Ross to deliver training to our students.”