Hangzhou, China / April 6, 2022 - Dahua Technology, a world leading video-centric smart IoT solution and service provider, successfully held an online event today to celebrate the 10th anniversary of its self-developed HDCVI technology. With the theme of “Blazing a trail to the Over-Coax AI era”, Dahua showcased the latest achievements of the HDCVI technology enhanced by AI, and shared the success of its technological innovation and business development with global partners and customers, achieving another milestone in the Over-Coax industry. 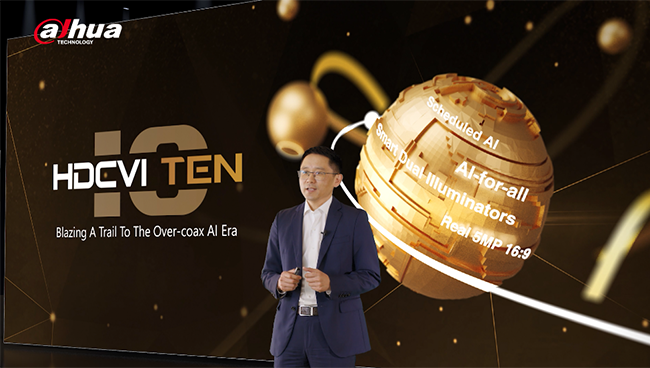 “Ten years ago, Dahua first released the HDCVI technology with independent intellectual property rights, transforming the analog video monitoring industry from standard definition to a millionth level high definition era. Over the past decade, HDCVI has led the Over-Coax industry to new heights. This year, HDCVI will lead the Over-Coax industry into a new AI era. We will provide users with more comprehensive and easy-to-use Over-Coax AI intelligent solutions,” said Jason Zhao, Dahua Senior Vice President and General Manager of Overseas Business, in his opening speech during the event.

Since introducing its self-developed HDCVI technology in 2012, Dahua has been on the forefront of delivering long-distance HD transmission and seamless upgrading experience for analog system users. At the event, Dahua announced the four core technologies of its brand new HDCVI TEN in 2022, including AI-for-all, Scheduled AI, Smart Dual Illuminators, and Real 5MP 16:9, helping to usher in the Over-Coax AI era.

Committed to bringing an ‘AI-for-all’ experience to its customers, Dahua is one of the first innovators in the industry to release a full line up of AI-enabled XVRs. Following the launch of the groundbreaking entry-level AI XVR, Cooper-I Series last year, Dahua has been pushing its ‘AI-for-all’ concept to the next level, allowing users to enjoy SMD Plus, Perimeter Protection, AI Coding and other useful AI features of HDCVI TEN at a friendly cost.

Moreover, HDCVI TEN is also packed with a handful of new and exciting technologies that can greatly improve the operation efficiency of analog systems and expand the range of suitable application scenarios. For instance, the Scheduled AI function of XVR5000-4KL-I3 series supports automatic switching of multiple AI functions according to the time period set by the user, making it ideal for villas, retail stores, public swimming pools, etc. At the same time, the Smart Dual Illuminators feature of HDCVI TEN integrates smart target detection and full-color monitoring for effective information collection in low-light conditions while helping mitigate light pollutions at night. In addition, the Real 5MP camera of HDCVI TEN with 16:9 video output effectively solves the image quality loss caused by image stretching in traditional 5MP 4:3 video output, thus providing undistorted image performance with optimized visual experience. It can be deployed in parks, casinos, museums, and other scenarios that require clarity and fluidity in their video surveillance.

With the overwhelming support of our customers around the world, the 10th anniversary celebration of HDCVI came to a successful conclusion. As an innovative technology with massive significance in our generation, HDCVI has been leading the evolution of Over-Coax industry and constantly elevating the analog video monitoring to a new level. In the future, Dahua will continue to adhere to its mission of ‘Enabling a Safer Society and Smarter Living’, focus on technological innovation, create more possibilities for its customers, and continue to contribute to the development of the Over-Coax industry in the next decade.

To learn more about the launch event, click here to watch the replay or visit Dahua Blog.

Message us on WhatsApp