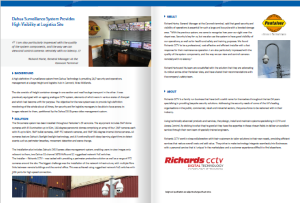 A high definition IP surveillance system from Dahua Technology is providing 24/7 security and operations management at a large freight and logistics hub in Cannock, West Midlands.

The site consists of freight container storage in one section and road haulage transport in the other. It was previously equipped with an ageing analogue CCTV system, elements of which were in various states of disrepair and which had become unfit for purpose. The objective for the new system was to provide high-definition monitoring of the whole site at all times, for security and for logistics managers to be able to have access to images relevant to them, partitioned by the Dahua DSS Express video management system.

The installer – Richards CCTV – was tasked with providing a perimeter protection solution as well as a range of PTZ cameras around the site. The biggest challenge was the installation of the network infrastructure, with multiple fibre links between remote buildings and the central office. This was achieved using ruggedised network PoE switches with 2Gb ports for high speed connection.

Richard Harte, General Manager at the Cannock terminal, said that good security and visibility of operations is essential for such a large and busy site with a bonded storage area. “With the previous system, we came to recognise how poor our sight over the depot was. Security is key for us, but we also use the system to have good visibility of our operations, as well as for health and safety and training purposes. We found Richards CCTV to be a professional, cost-effective and efficient installer with a fast response for their maintenance operation. I am also particularly impressed with the quality of the system components, and the way we can view and control cameras remotely with no latency.”

Richard Harte and his team are so satisfied with the solution that they are advocating its rollout across other Pentalver sites, and have shared their recommendations with the company’s safety team.